Continuing on with the Vacation Slideshow....

On Friday, our third day in Louisiana, we started the day with breakfast at Cake. Now, I've heard such wonderful things about this place but to me I really didn't see the draw. It appeared to be a local favorite, but for me, nothing so much to write home about. After breakfast we headed out of the city and into plantation country. Our first stop was at Laura Plantation. A traditional creole plantation, Laura Plantation was built off the ground and is decked out in an array of colors. As a creole plantation, it was mainly built for work as the families mostly had their money in their French Quarter homes. While it's pretty modest in looks compared to traditional American plantations the grounds were amazing, lots of gardens and sugar cane plants, and the tour was one of the best ones we had on our entire trip! I heard a lot about how plantation tours will often leave out the history of slavery associated with it but I found the plantation tour at Laura Plantation to be very informative and, to an extent, no holds barred. If you're ever up in this area, I'd definitely recommend a stop at Laura Plantation!


The second plantation we visited was Oak Alley Plantation, an immaculate plantation built in the traditional American plantation style: low to the ground, painted white, and exhuming all the wealth of the family that lived there. Oak Alley is perhaps best known for its avenue of oaks that run down the main walkway leading up to the house. It's interesting to note that the oaks actually predate the plantation-- though I forget what they were originally planted for. If this house looks familiar perhaps it's because you recognize it as being the home Louis de Pointe du Lac lived in in the film Interview with the Vampire. Anne Rice fans can also note that this plantation was the inspiration for the Talamasca Motherhouse in Louisiana in the Vampire and Mayfair witches series.

While the main tour of the house we went on did not talk much at all about the history of slavery at the plantation, the people at Oak Alley were sure to let us know there was another tour completely dedicated to this that was included in the price of admission, though we did not have enough time to also go on that tour. 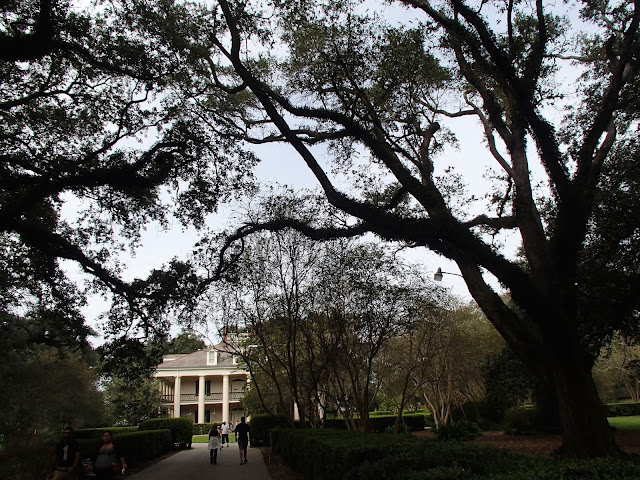 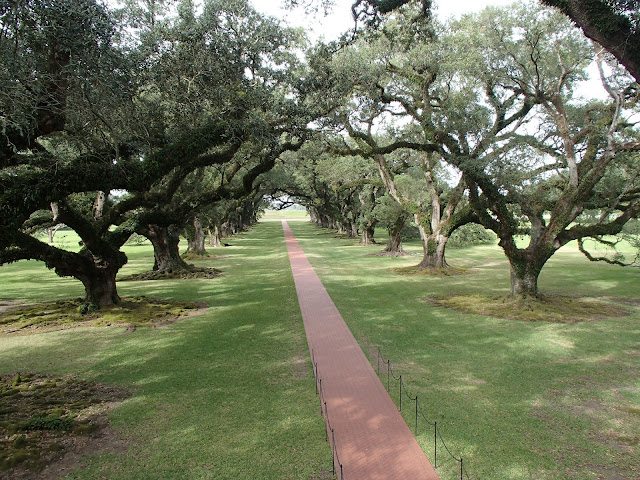 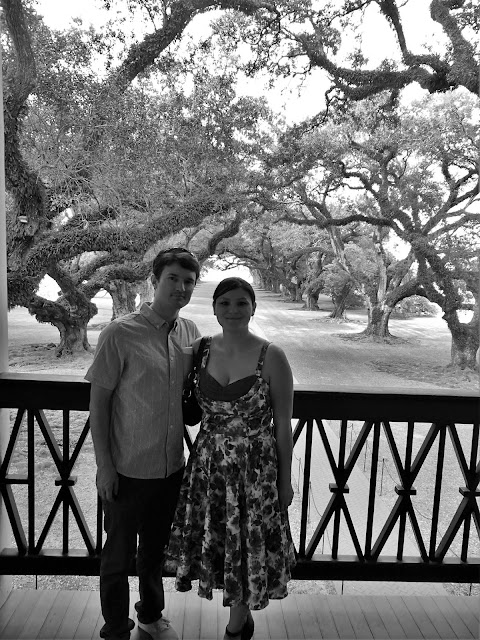 The third plantation we visited was the haunted Myrtles Plantation farther north in St. Francisville, which is where we stayed for the night. We arrived just 10 minutes too late and missed the last history tour of the day but did make it in time for their mystery tour which they run Friday and Saturday nights.

The mystery tour gives a tour of the downstairs area of the house while telling several ghost stories which include the history they think pertains to these hauntings. While I'm a huge horror fan and love ghost stories I admit I was really nervous to stay the night here. We weren't able to get a room inside the main house but instead stayed in one of the outside rooms. Did anything happen during our stay you may want to know? I honestly believe so. At least twice during the night I woke up because I could feel the bed shaking, thinking it was an earthquake. When I remembered we weren't in California I chalked it up to Tim perhaps turning over in his sleep. However, the next morning when I was fully awake, awakened at 7 in the morning by the bed shaking again, I got a good look at the bed and noted that it was a really sturdy and dense bed without much spring to it. I could sit down on one side of the bed without the other side moving at all. Perhaps it was all in my head since I was already spooked to sleep there but I swear I woke up at least twice in the night because it felt like there was an earthquake. Another thing to note, when we first got into our room I turned the thermostat way up... up to about 76-77 degrees because the room was a little cold. At night, waking up in the night, I was really cold and could hear the air conditioner running even though it felt like it must be in the high 50's already. I was too afraid to get up to check it out but what I don't understand is why the air conditioner would have been running when it wasn't supposed to kick in until it was a warm 76-77 degrees. Seems a little strange to me. 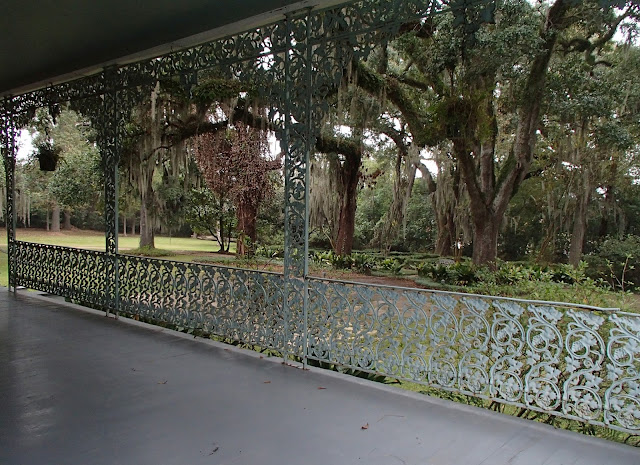 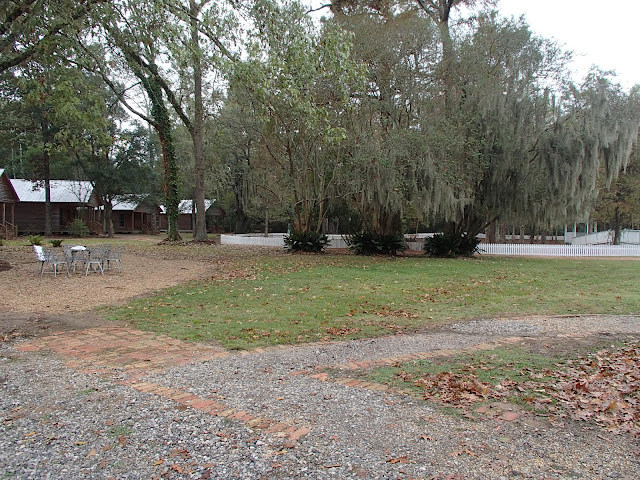 After our mystery tour at the Myrtle's Plantation and after having a wonderful dinner there at their Carriage House Restaurant, Tim and I drove down to Baton Rouge to go to the Halloween Haunted house, the 13th Gate. The 13th Gate consecutively makes it on the list of the top 5 Halloween haunted houses year after year, often times making it to number one! This year hauntworld.com listed it as #3 in the country. It was the most amazing things I've ever seen! For a horror fan, it is the stuff dreams are made of! To say it was incredible would be an understatement. The people who put this on and who created and run this are truly artists and masters at what they do! Just imagine, the scariest movie you've ever seen in your whole life and imagine living it. That is what this was all about. So great!!!

On Saturday morning, we woke early, checked out, and made our way back to New Orleans to start our Halloween celebrations, but not before taking this picture out in front of Myrtles Plantation!


Back in New Orleans, after dropping off our rental car, our first stop was at the Windsor Court Hotel for tea time at Le Salon. 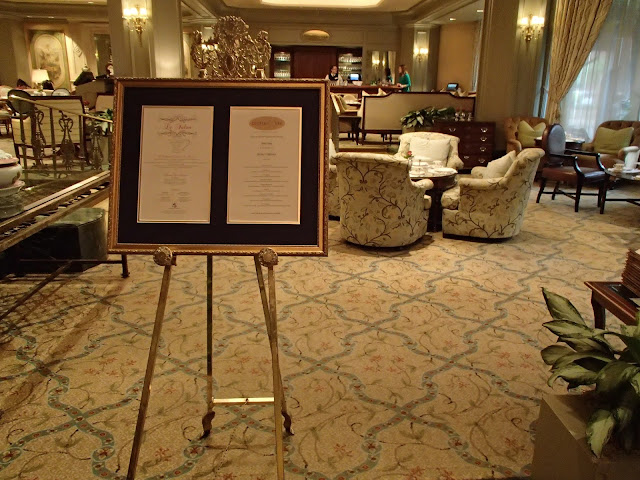 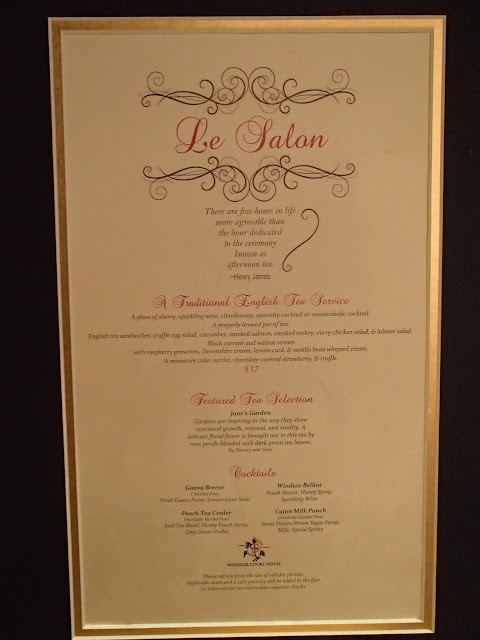 The tea was impeccable, the finger sandwiches scrumptious, the scones flavorful and warm, and the desserts delightful. Two things that really made this place stand out for me was that tea came with your choice of a mixed cocktail, and also the tea itself was fully served by the server rather than poured by yourself at the table. I know this was something Tim did not care for much but I really appreciated this extra touch of indulgence. Our cups never made it down to the last drop and our cups were continuously kept warm by this constant top off. Another thing that was extra special was the harpist they had playing throughout the entire tea. She wore Trashy Diva too nonetheless! 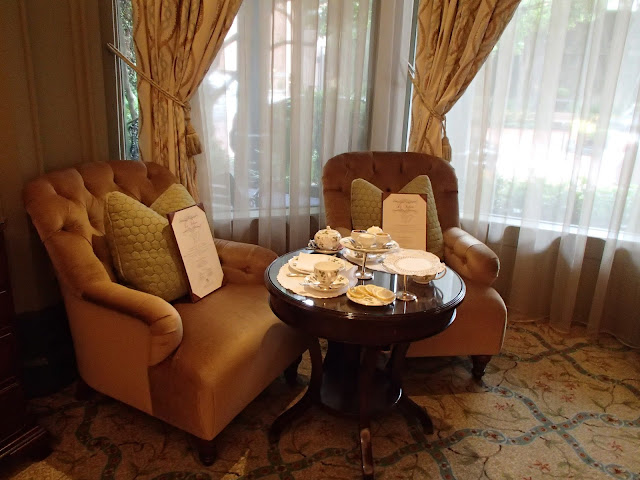 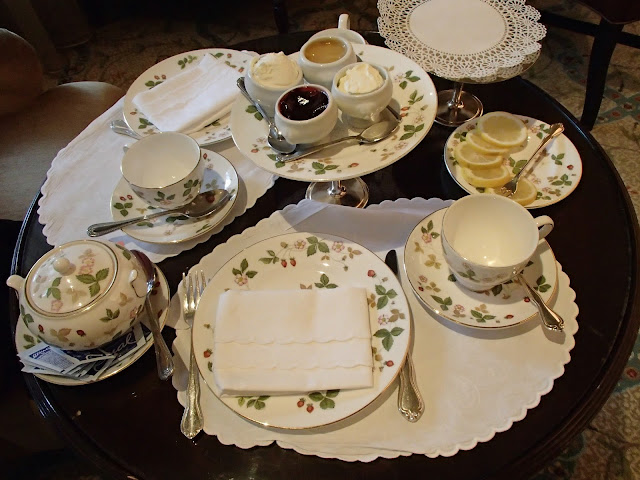 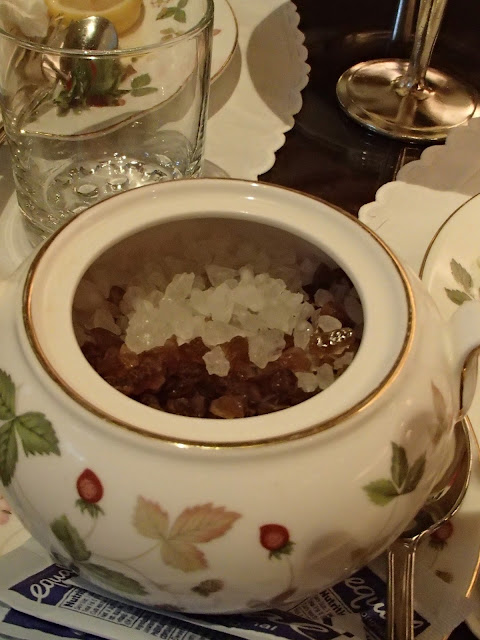 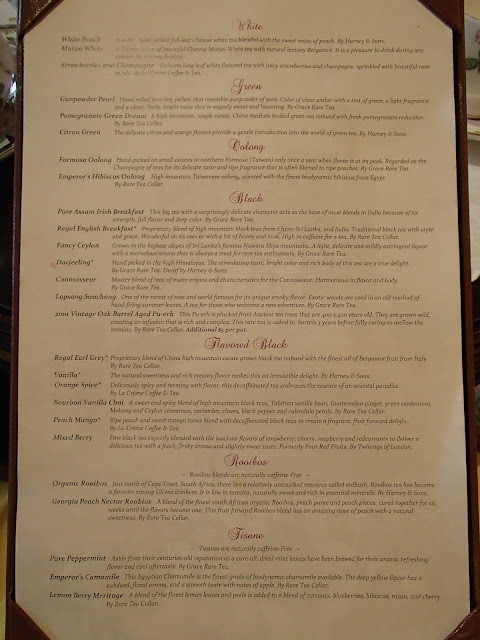 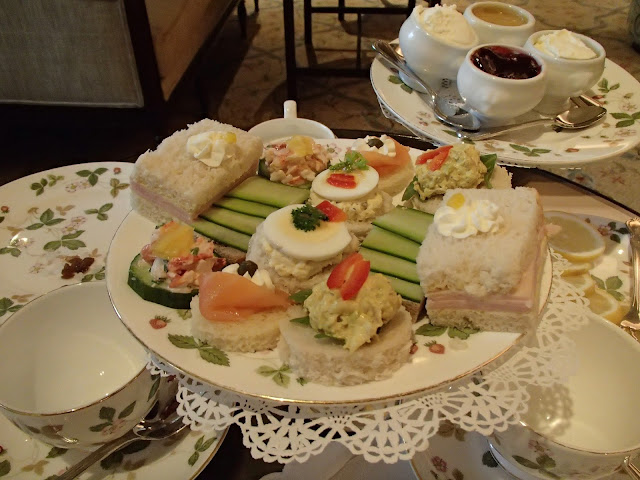 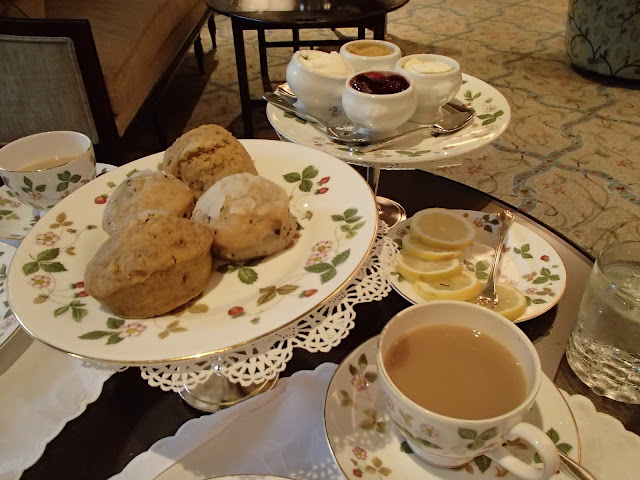 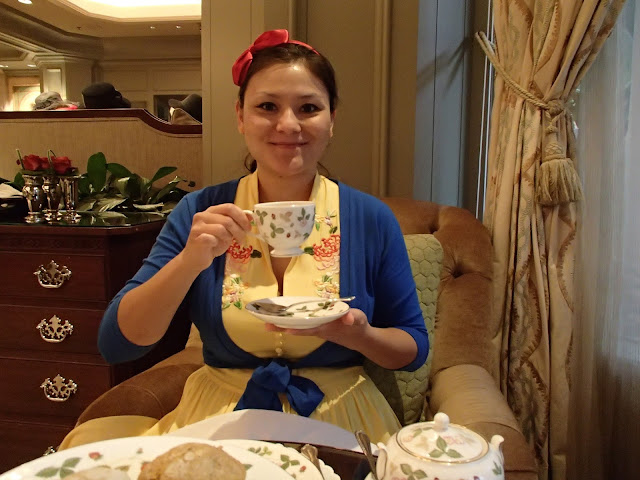 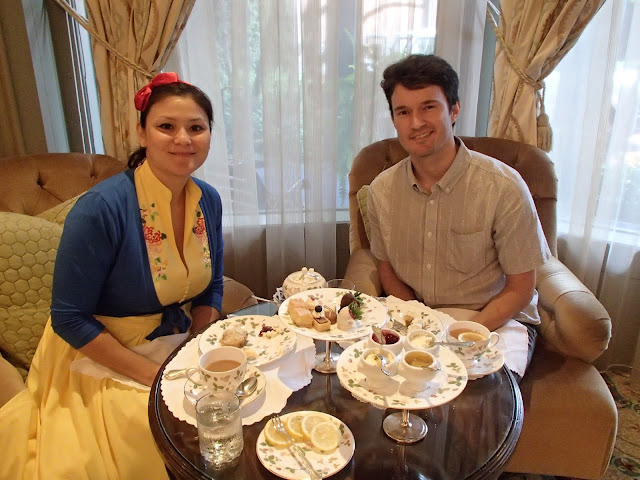 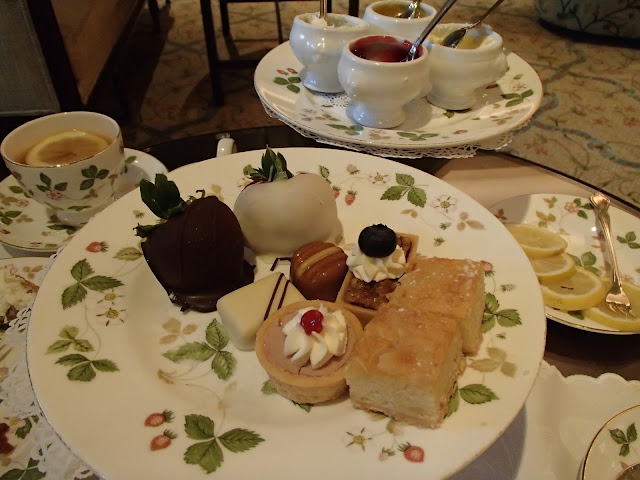 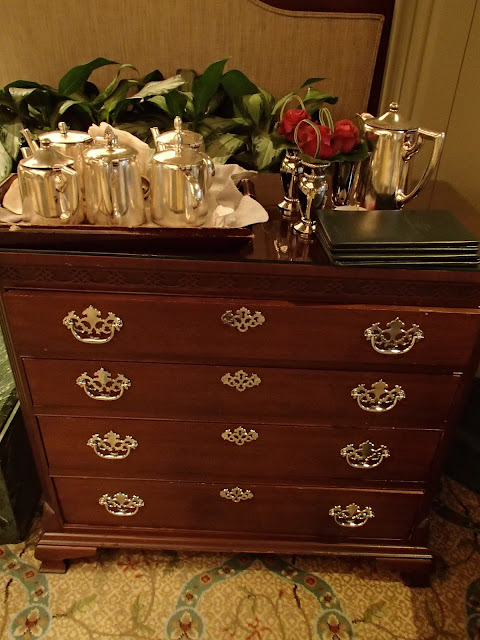 After tea we went back to our bed and breakfast in the Garden District to get ready for our night out for Halloween but not before walking through the French Quarter where I was able to finally get a pic of the outside of Trashy Diva on Royal St.

Outfit of the Day
Friday:
(pictured above) For Friday it seemed fitting to wear my Trashy Diva circle skirt and lena top in Jade Watercolor. I paired this with my black ankle strap flats, the only somewhat dressy shoes I packed.

Saturday:
(pictured above) On Saturday, in the spirit of Halloween, I wore a Snow White inspired outfit which you might have seen in one of my previous Perfect Pairing posts here. For this look I paired my Trashy Diva yellow Maria dress with a blue Sweet sweater by Heart of Haute, a red bow headband in my hair, and my black ankle strap flats.