Outfit of the Day: Luck of the Irish

I didn't really think too hard about what I was going to wear as we were just planning on making a quick trip to the downtown area in town and then go pick up some dinner but I ended up wearing my Trashy Diva Streetcar dress in Irish Polka which now seems pretty fitting for both the day and the title of this blog post ;)


Outfit of the Day:

For this day I wore my Trashy Diva Streetcar dress in Irish Polka. Because it was so hot outside I decided to forgo wearing the necktie with it and opted to wear this dress with the collar open. I paired this dress with a pair of basic black flats.

Last weekend was a full one


My husband and I started out the weekend by having a date night on Friday night and went out to dinner at the place where we had our very first date, Pasta Pomodoro.

Then on Saturday I went out with my mom for a bit of shopping and for lunch. I picked out some new shoes which she bought me for an early birthday present! Then afterward Tim and I went out to the miniature golf place but they were too crowded so we just played at the arcade for a bit and went out for green tea flavored shaved snow with mochi. So tasty.

On Sunday, Tim and I went out with Tim's mom to breakfast and then the movies to see the new Ghostbusters movie. It was cute and I loved the character Holtzmann played by Kate McKinnon. After the movies Tim and I decided to go to Cyberdyne or at least the building in Fremont that was used in the Terminator 2 film as the home of Cyberdyne Systems. It was fun seeing this place in person!

Outfit of the Day (Friday):

On Friday for an impromptu dinner date I decided to wear my Trashy Diva Lucille dress in Lucy Dots. I paired this with the matching Lucy Dots bolero, a white belt, and a pair of peach flats by Gabriella Rocha which I got several years ago from Zappos.


Outfit of the Day (Saturday):

For a day out and about, first with my mom then with Tim, I decided to wear my Trashy Diva L'amour dress in Crimson Clover. You may recognize this print from a previous dress I reviewed, the Trashy Diva Ashley dress in Crimson Clvoer, but after reviewing that dress I decided I just wasn't really feeling the cut and got this one instead. I love the fuller skirt on this one and the fun summery warm weather feel of it. To make it more modest (there's a peek-a-boo hole at the ties at the bust), I decided to wear a navy camisole underneath it which worked out perfectly. I paired this with navy flats by Blowfish which I got from Zappos several years ago. For simplicity I wore this with a pair of small white pearlescent studs which I got from Forever 21 last year. For a finishing touch I got out my pink cat purse which I've never actually used before. I got it several years ago when I was in Australia studying abroad for a year for college. I found it in a little shop down the street where I lived in Brisbane called Pussies Galore. That shop was kitties everything-- it was the best shop ever!


My mom got me these shoes for an early birthday present which I picked out while we were shopping at Nordstrom Rack that day. I couldn't help but change into them that day!

Outfit of the Day (Sunday):

On Sunday since Tim, his mother, and I were going out to see the new remake of Ghostbusters. I thought my Deadly Dames Darling Dames skirt in Venus Fly Trap from Pinup Girl Clothing would be a good pick for the day. It's not the same theme in movie but Little Shop of Horrors and Ghostbusters are from the same decade and they are both from the funny and dark variety so I thought it worked. I paired this with a black trixie top from Trashy Diva which I got earlier this year, a purple caridgan from Nordstrom Rack which I got several years ago, and a pair of Jessica Simpson Mandalaye ballet flats which I got from Macy's last year. For a finishing touch I wore a pair of purple bow stud earrings which I got from a nearby vintage style shop, Vintage Alley about a year ago. 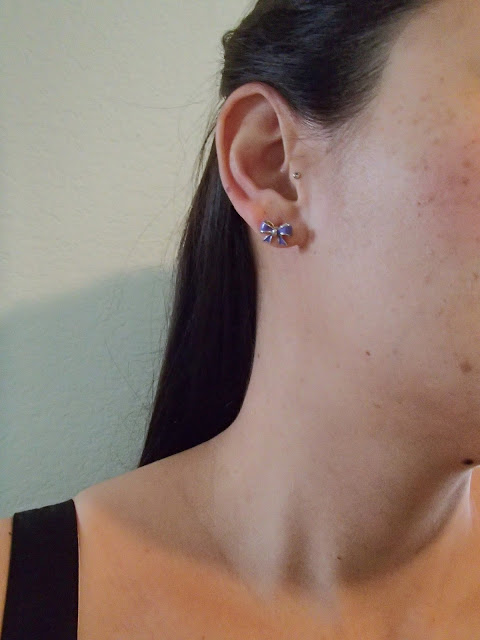 Outfit of the Day: Bright and Sunny for Summer Tea


Tea at the Rotunda was as sophisticated and simplistically elegant as always.

For tea this day I decided to treat myself to a glass of bubbly and got the Grand tea. We were then treated to a small demitasse of chicken consume and a small cheese pastry to "cleanse the palate" followed by a popover before the main tea. Going on memory and with the help of some pictures, tea consisted of six tea sandwiches, a salmon, an egg salad, a chicken salad, a cucumber and butter cream spread, a prosciutto apple wrap, and proscuitto and cream cheese sandwich, a scone accompanied by cream, raspberry preserve, and lemon curd, three mini pastries, a lemon meringue, a crunchy chocolate peanut butter bar, a citrus and vanilla cupcake, all finished off with a white chocolate dipped strawberry. The tea spread was gorgeous though we all felt that the bread on the sandwiches sadly tasted stale. To go along with my tea on this day I chose a vanilla decaf tea. The tea itself was very flavorful and the vanilla very strong.

Once again, it was a lovely time for tea at the Rotunda at Neiman Marcus and a lovely day out spent with friends. 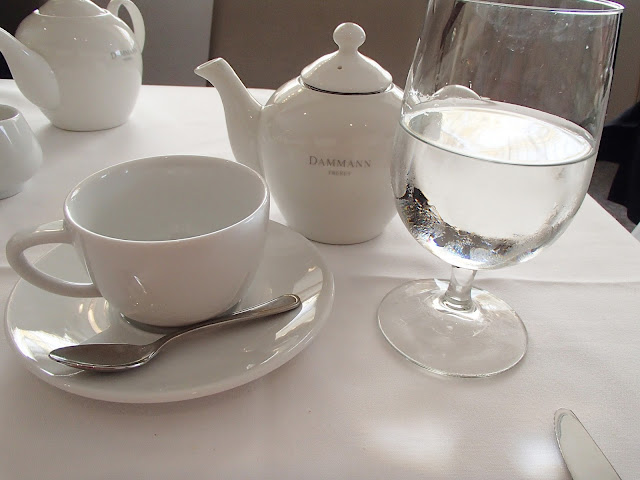 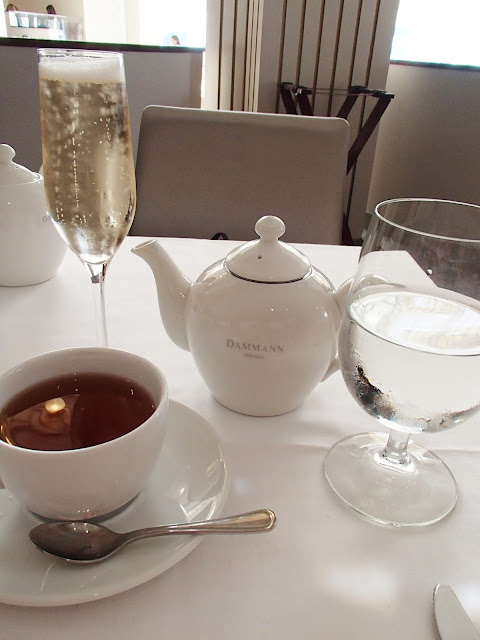 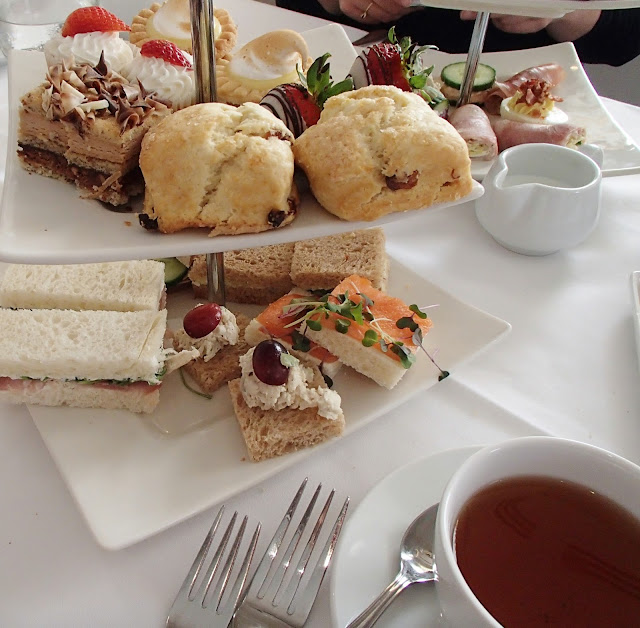 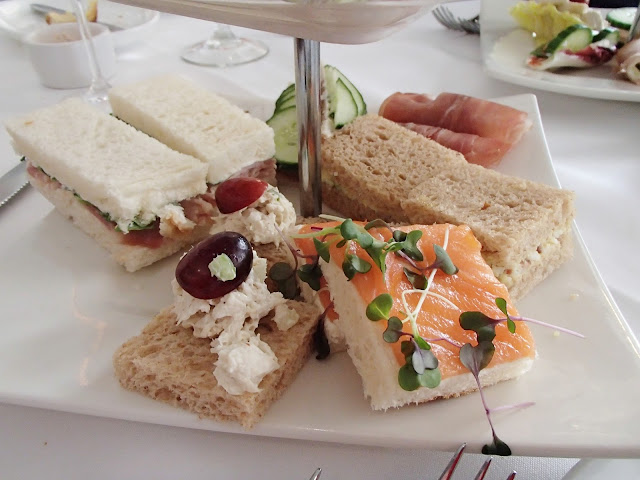 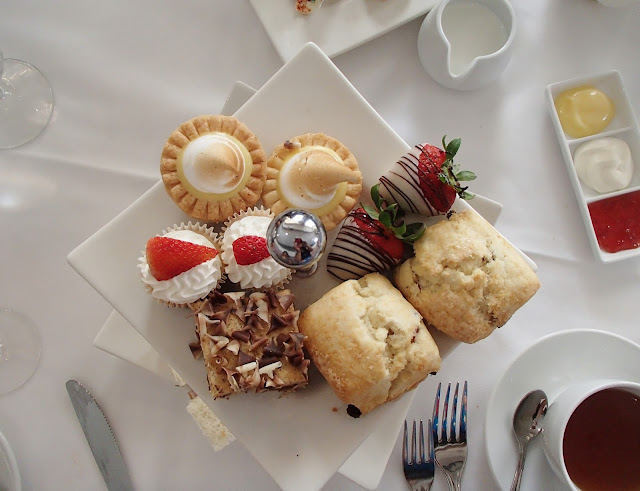 Outfit of the Day:

Seeing as it was the first official tea for summer and it was Neiman Marcus, I decided to wear one of my more brighter, yet mature and fashion forward dresses, my Trashy Diva Loop dress in Geisha Fans print. I paired this with peach flats by Gabriella Rocha which I got from Zappos several years ago, and a peach colored cardigan from Target, also from several years ago. For a finishing touch I decided to wear a pair of peach colored floral stud earrings from Forever 21 from a few years ago.

This past weekend was 4th of July weekend!


It was chock full of wonderful time spent out of doors and out spending time with friends.

While fourth of July usually passes without too much fanfare from me, I had a dose of extra enthusiasm this year for the event and the weekend in general. I owe this all to Jessica at the blog Chronically Vintage for sharing so much of her enthusiasm for this holiday as well as her enthusiasm and love over her native holiday, Canada Day. Hearing her take on the festivities that happen here in the states with our bbqs, fireworks, and parades made me want to make sure I fit at least some (if not all) of these activities into my holiday weekend. Sometimes it just takes a fresh pair of eyes to see something in a new and enthusiastic light.

On Saturday Tim and I spent the morning going out for breakfast and then spent the afternoon exploring around town, going to the mall for a bit, getting ice cream, and seeing what was playing at the movie theater. He had his heart set on watching the new Flula Borg movie Buddymoon but it turns out it is only out in very limited release.

On Sunday we spend the day out at the beach with one of our friends. The early afternoon was spent first getting together equipment for the day then a stop for lunch before the beach. We had the plan to go windsurfing that day. It was going to be my first time trying it, but it turns out the windsurf board we had was way too small for beginners. While the guys had a good time trying it, I got to enjoy a day out on the beach enjoying the good weather.

Monday was an extra special treat. It turns out the friend we saw just the day before helped make a float for the Alameda 4th of July parade for a club he's in and we got invited to sit on it! I've never been in a parade before so this was an extra special treat to not only get to see the parade but also be in one and join in! The Alameda 4th of July parade is herald as being one of the largest and longest 4th of July parades in the country. It makes a 3 mile loop around Alameda and by the time the last of the floats are starting to make their journey out of the starting gate the first floats are making their way back to the start. It was an awesome experience to say the least. After the parade the club for which the float was representing, the Aeolian Yacht club, was having a bbq, which we got to go to as well. It was a great bbq, right on the water with live music! After eating Tim and I went for a walk along one of the shoreline walking paths, and then after, came back to the club to play a couple rounds of horseshoes with our friend. Before heading home we decided to stop by another bbq other friends of ours were hosting ending the night seeing some fireworks going off both near and far.


Outfit of the Day (Saturday):

I decided to kick start the 4th of July weekend with my Trashy Diva Trixie dress and bolero in Sci Fi Rockets print. I figured the red white and blue colors would make for a perfect dress this weekend. I paired it with a patent leather-like red belt which came from a Bernie Dexter dress and some comfy blue Rocket Dog flats which I got several years ago, I think from Zappos. For a finishing touch I wore golden stud earrings, which I bought last year from Forever 21, to match the golden yellow of the rockets in the print.


Outfit of the Day (Sunday):

Outfit of the Day (Monday, 4th of July):

On 4th of July I had my heart set on wearing my Stop Staring Sailor swing dress (A.K.A. the Luxury Craft dress) which I got from Modcloth a couple years ago. It just so happened to work out perfectly for the float we ended up being on for the 4th of July parade that day! To add extra touches of 4th of July to this outfit I paired it with my red Ecco flats, red floral stud earrings I got from Forever 21 a couple years ago, a red bracelet my step mom gave me a few weeks ago, and a red vintage purse I got from Etsy several years ago.

Did you do anything to celebrate 4th of July? Did you end up dressing in theme this year?