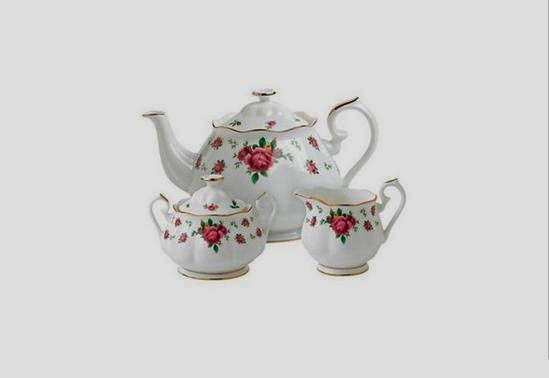 
Perhaps most known for their pattern, Old Country Roses, a pattern launched in 1962 based on an older pattern, King's Ransom, Royal Albert has actually been around since 1896. Nowadays they fall under the larger company Royal Doulton which in turn is owned by WWRD (Waterford Crystal, Wedgewood, Royal Doulton).

Royal Albert prides themselves on being "dedicated to English grace, elegance, and romance since Victorian times," and thus, loves to emphasize floral motifs in their patterns, namely roses, England's national flower.

I love the playfulness of the polka dots: so sweet and so traditional, yet also so unexpected in a tea set! It seems that polka dots were very favorable on tea sets in the 1940's and 1950's yet it doesn't look like there's been many tea set with polka dots since. I am so glad that Royal Albert is now offering tea sets with polka dots as it appears they were doing back in the 1940's and 1950's! Out of the two polka dot sets, perhaps the Royal Albert New Country Roses Polka Rose is my favorite.

I love the light minty green color of this set as well as the small white polka dots showering the outside of the set. Four evenly spaced little roses garnish the lid of the teapot as well as the inside of the tea cup walls while one additional rose also adds a finishing tough to the inside bottom of the tea cups. It seems to me the quintessential of country charm and it has such an authentic vintage 1930's and 1940's feel. Though in my eyes Royal Albert New Country Roses Polka Rose is closely followed by Royal Albert New Country Roses Polka Blue!

What I love about the Polka Blue set is its youthful vibrancy. With this set the polka dots are combined with large roses tastefully placed throughout the pattern. While it has a very modern feel to it, it is also very reminiscent of the 1950's: clean-cut, darling, mannered, and manicured.

Last but most definitely not least is the Royal Albert New Country Roses Confetti Rose. This set features small roses throughout the pattern interwoven with small black outlined vines and leaves in a traditional chintz style. What I love most about this pattern is the cups and saucers which, contrasting with the tea set, has the rose chintz pattern on the inside of the cup with a fine solid pale pink color as the main body. This set exudes class and elegance.

And here are some pictures of these patterns mixed and matched:


And for those interested in this pattern but who don't desire a full tea set, there are also tea for ones available.

In actuality, there are all sorts of things available in these patterns from dinnerware, trays, tablecloths, kitchen towels, tea strainers, tea holders, candles... the list goes on. Looks like Royal Albert knows a good thing when they see it. :)