Taking Tea at the Claremont Hotel


The Claremont hotel is a historic hotel in Berkeley, California. I pass this gorgeous old white lavish looking hotel nearly every day on my way to work. For years I've been wanting to have the opportunity to go through its gated walls and check this place out.

Over the Christmas holiday I noticed they were changing out the main sign on the entrance of this hotel. It now read that the Claremont Hotel was part of the Fairmont Hotel's properties. I've long known that the Fairmont Hotel is usually big on offering afternoon tea (the Fairmont hotel in San Francisco is the first place I ever went out for tea back when I was thirteen and my aunt decided to treat me for my birthday). While I checked previously if the Claremont Hotel offered tea (they didn't) I figured now that they are part of the Fairmont Hotel I should check again, and low and behold they did! They even were able to accommodate for special dietary restrictions such as gluten free, vegetarian, and vegan. I quickly arranged with a group of friends to go out to tea at the Claremont Hotel for a New Years celebration-- one of which was coming for the vegan tea. Our tea was scheduled for a few weeks prior but because I got sick for the weekend we were originally supposed to go we had to reschedule for this past weekend.

We arrived at the Claremont Hotel just in time for our reservations. It took a bit of maneuvering to get through the smallish and hilly parking lot but parking was not too bad. From the outside walking up, the hotel did not quite seem as grand as it usually does from at the bottom of the hill. There seemed to be an unfortunate amount of construction happening in front of the hotel. Walking through the lobby though, it was as gorgeous as I expected. Entering the main door you walk through a long well appointed hall, opulent and chic, until you get to the main lobby. To one side is the front desk, and to the other the Claremont Lobby Lounge and Bar. There were no signs pointing the way or to announce what it was, but seeing the tables where guests were sitting enjoying drinks gave you a bit of the idea.

We walked into the area (the entrance of which was too large to quite call it a separate room) and right away someone came out to help us. The lady checked my name for our reservations and showed us to our seats. We had our pick of a table right in the middle, one a little farther back, or one right in front of the window. While I knew the window table was going to get hot after a while we opted for the window because of the view of the bay. We were asked if we wanted waters to start and after a little bit of a wait were brought menus.

The decor for tea at the Claremont is much like the decor in what we saw in the hotel along our way... modern and chic. The tables had a mirrored table top and the tableware was all white with modern style. While tea time at the Claremont is a pre fixe menu, they did bring out menus featured on tablets (adding to the modern chic of this tea) to show you what was in store for your tea. Most of what was written on the menu though, I had no idea what they were: scuffins, possets, profiteroles. I decided I will just have to wait and see what was to come. For tea you did get a choice of tea selection... it was not the most expansive selection of tea, maybe a dozen or so to chose from (including only one herbal and no decaffeinated from what I could tell). Also, about half of their teas were at a premium and would add an extra $8 to your tea service if you chose any of those. Sparkling wines were also on offer for an extra $12 or so. For the hefty price tag of the tea, $48, I was kind of hoping it would come with some kind of sparkling wine or cocktail. Most certainly though, I would have expected at least that choosing a specific tea offered would not add an extra $8 to the cost.

Once we were settled, individual teapots were brought out for us with the tea of our choosing along with a tea timer to tell you when the teas were done. While I've never be to tea where tea timers were brought out, I do know that each kind of tea (white, green, black, etc) brews at different times so I'm not sure if we all just ordered black teas (I forgot to check with my lady friends) or if the tea timers are more just a formality to add to the experience. Next we were each offered a small bite to get us started, a kind of soft cheese spread sandwich. My vegan friend was brought out a small helping of mixed berries. Next came the full tea spread on a three tiered (though not your grandma's style) modern tray. My vegan friend had her own tea which was arranged separately though I forgot to make a note of what she was brought out specifically. For the non vegans we each had a scone and a scuffin (a mix between a muffin and scone), served with cream fraiache and papaya fruit preserve. For savories we were served a tasty pea spread with crunchy peas and pickled carrots on toasted bread, a salmon tea sandwich, a lobster roll wrapped in thinly sliced cucumber, a chicken salad sandwich, and egg salad in a small cup with brioche fingers. For dessert we had a brownie, a cream puff sweet, a kind of lemon yogurt, a madeleine, and a cookie.

Overall tea was pretty good at the Claremont Hotel. While my vegan friend was not too pleased with her tea (it left something to be desired according to her) the food for the regular tea service was excellent! Overall, there are lots of tea places that I feel are better, especially for the price of this one, this one is a nice one to get to experience. 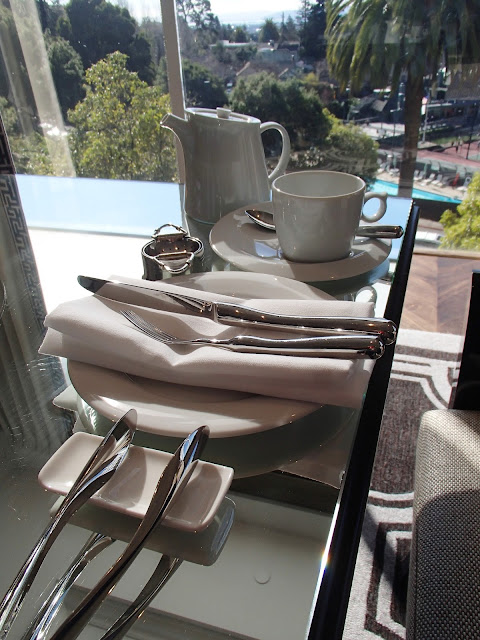 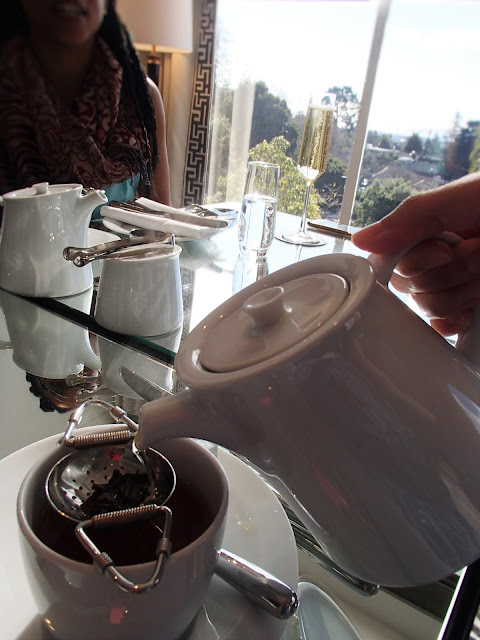 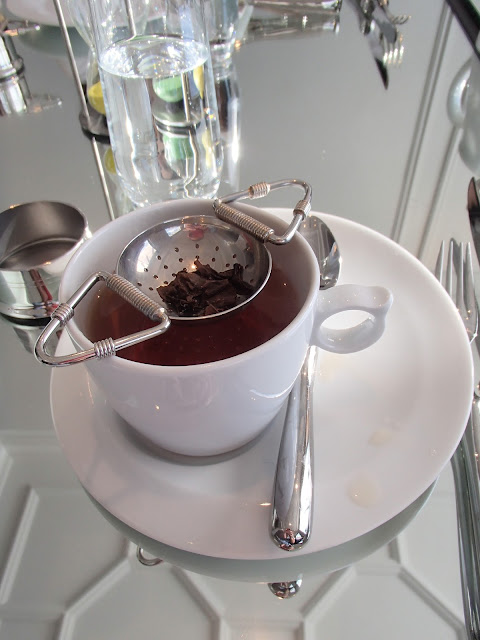